Refreshingly light and filling this chayote tuna salad recipe is amazing for a light lunch especially in the warmer months! 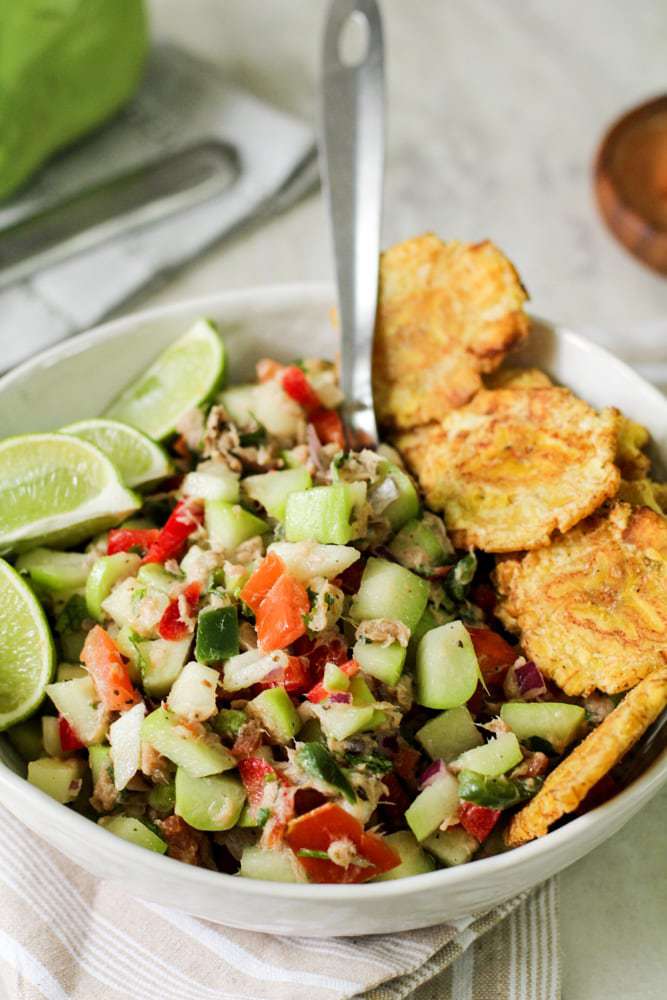 According to The Spruce Eats "Chayote (pronounced chahy-oh-tee) is a light green, pear-shaped fruit with a single, large pit and edible flesh and skin. The flesh of the chayote is mild in flavor. It has a texture somewhere in between a potato and cucumber. Although technically a fruit, chayote is often used more like a vegetable in Latin cuisine."

Basically, chayote tastes and acts like a potato, with having a mild taste and can be used in it's place for a healthier alternative. Also, chayote is juicy like an apple which makes it an excellent choice for salads in the warmer months. 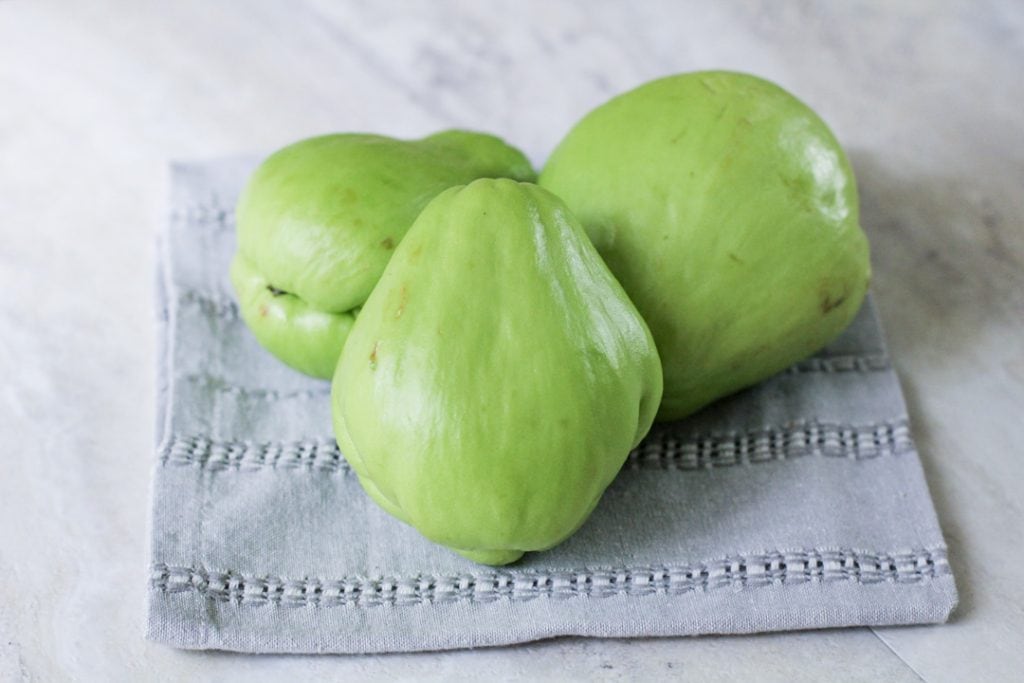 Can chayote be eaten raw?

Yes! As a matter of fact, for this tuna salad recipe, we are using raw chayote as the main ingredient.

When eating chayote, you want to make sure you rinse it well and remove the seeds/pit from the center. Chayote is very juicy, like an apple, but there is no real taste, which makes it an incredible ingredient to "fill" salads etc and build the profile of taste with the other ingredients.

Chayote is perfect with pickled/stewed pairings or for using it as an ingredient for salads with a bold flavor profile, like ceviche or tuna salad. 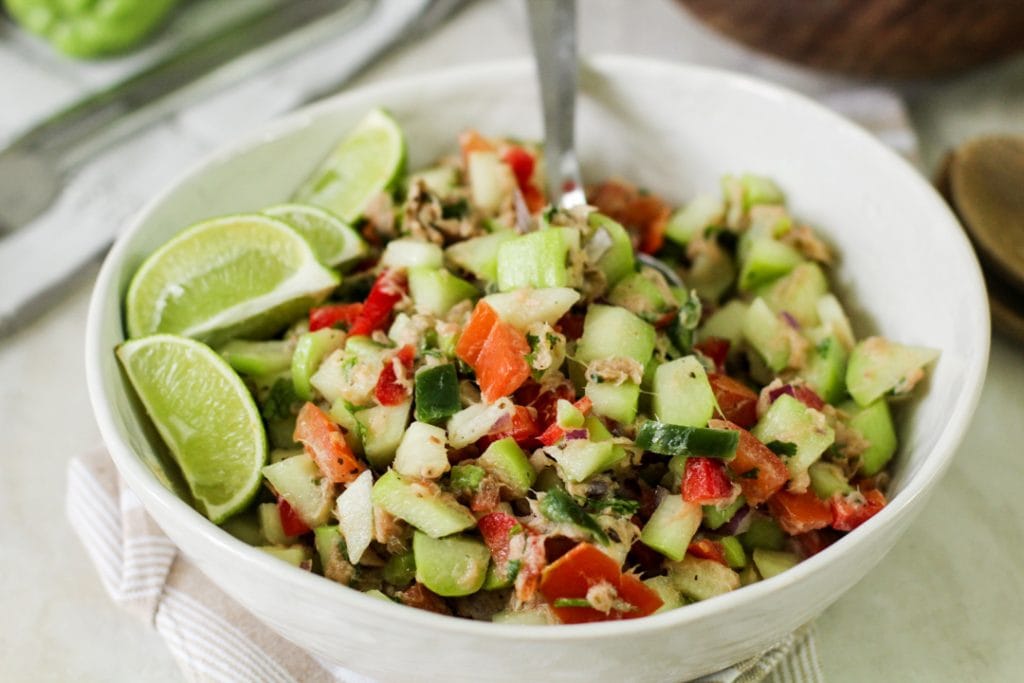 How do you make chayote tuna salad?

For this chayote tuna salad, we're going to start with chopping the chayote into bite size chunks. One chayote is plenty to make 2 full servings, or up to 4 side servings for meal prepping or as a side. 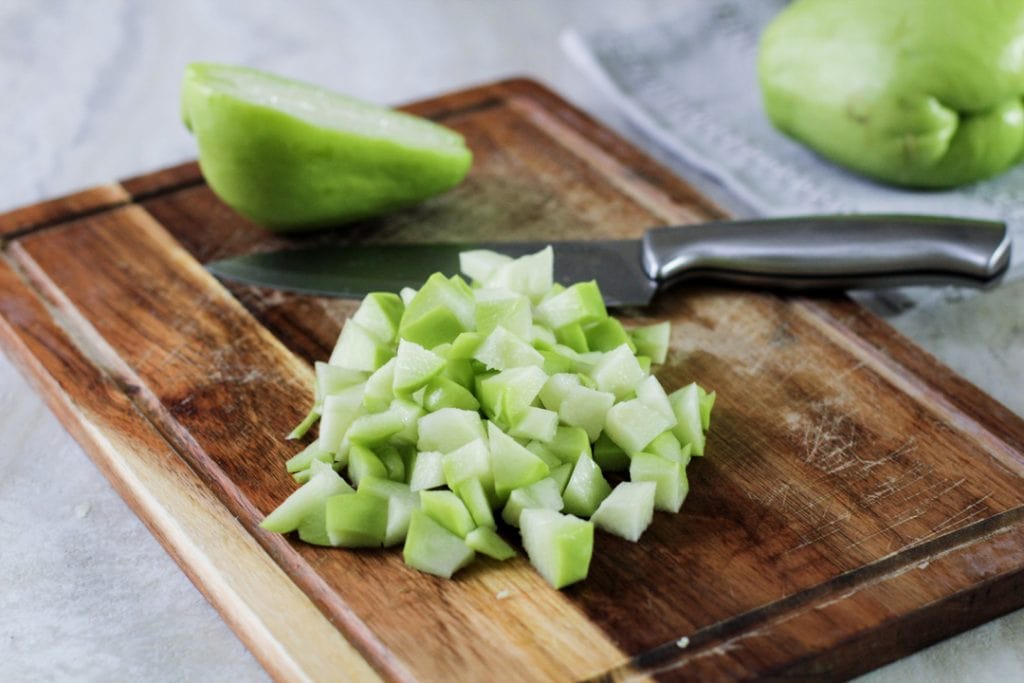 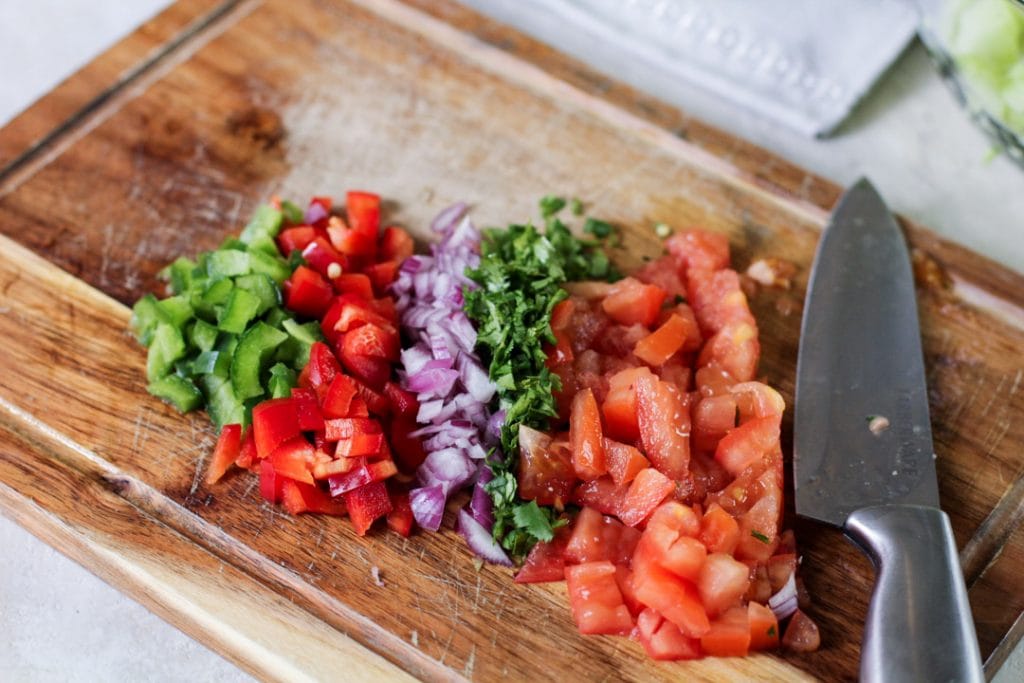 Add all of the chopped veggies into a bowl and add a can of drained tuna in water for this amazing chayote tuna salad recipe. 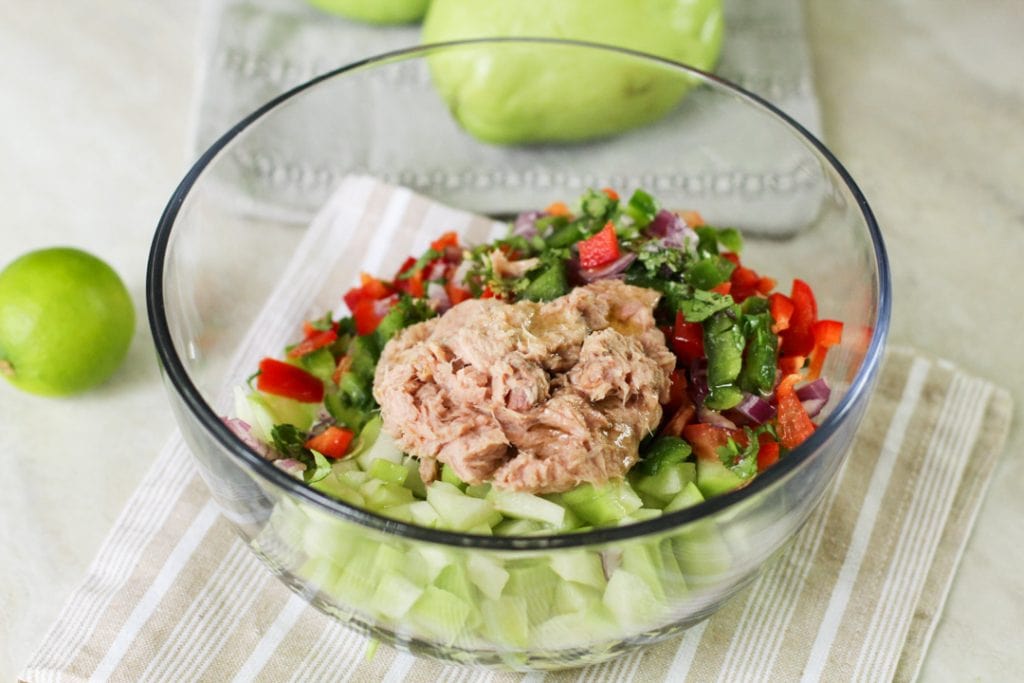 Add the remaining ingredients which is the vinaigrette. Olive oil, salt, pepper, oregano, and the juice of 1-2 limes. 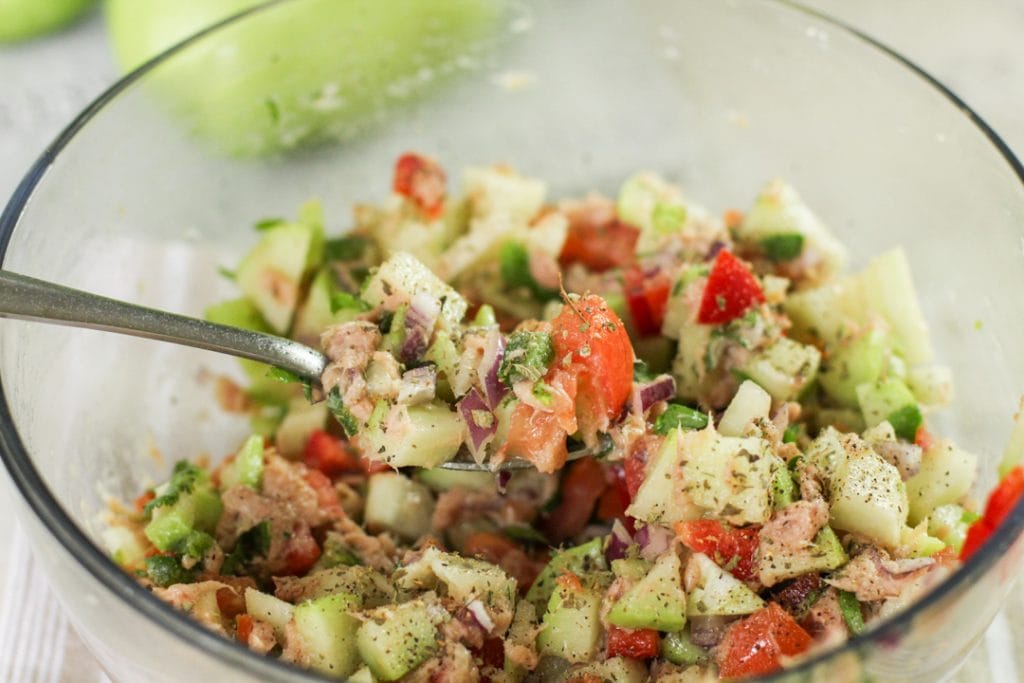 Freshly cooked garlic plantains are perfect with this chayote tuna salad. It was amazing!

If you want to see more chayote recipes, let me know in the comment section below! As always, buen provecho mi gente! 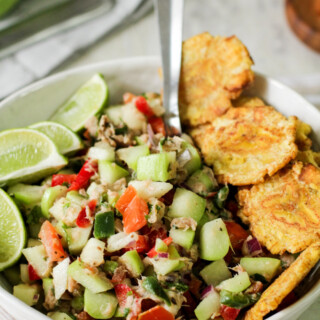 Keep skin on the chayote, it's so thin you won't notice it. Start with the juice of 1 lime. Taste it before adding more lime juice.
Keyword chayote, salad, tuna
Share39
Pin88
Tweet
Share
127 Shares 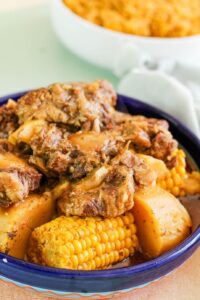 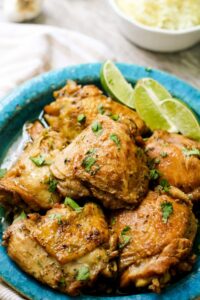 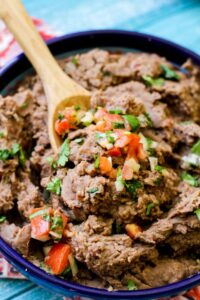 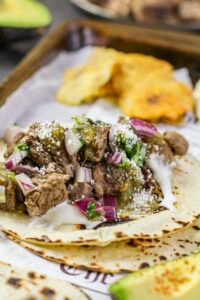 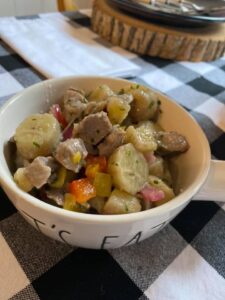 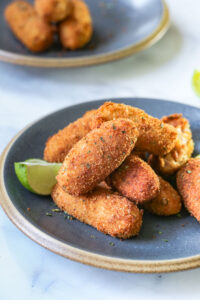 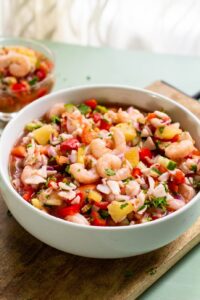 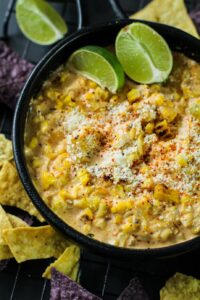 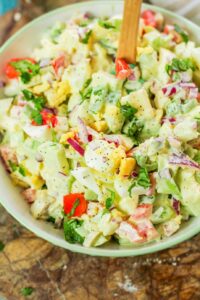 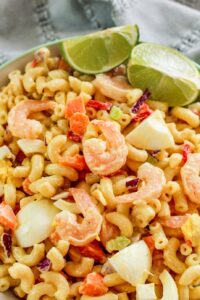 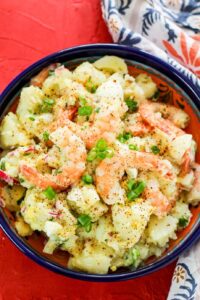